This Saturday, "Youth with You 2" finally ushered in the finals. The same type of female group variety show "Creation Camp 2020" has also entered its second performance. It is foreseeable that the hot search list of Weibo on the weekend will soon be contracted by these two programs.

In recent years, 101-style variety shows have come out of the circle one after another, and a new round of idol economy has been born around the idols who have been picked, and both capital and flow are chasing away "in groups".

Compared to the stars who fight solo, the idols who form a team seem to be more likely to succeed in the early stages of their debut. However, judging from the idol groups that have formed a group, some have soared into the sky and become top-ranked, and more members have fallen into the predicament of tepid and even flop again as the group's subsequent popularity declines.

How many successful cases can today's idol industry export us? What idols can be left in this era? We selected six idol groups from different 101-style variety shows

The last time the domestic draft was popular, it can be traced back to the "Super Girl" launched by Hunan Satellite TV in 2005. Fans used 3.52 million text messages to vote for the show's championship Li Yuchun.

Nowadays, the channels for fans to call idols have long since switched from text messages to video apps and Weibo, and the number of votes has expanded to tens of millions or even hundreds of millions. Thanks to the popularity contributed by fans, six groups have successfully debuted in 101-style variety shows.

The original intentions of the major variety shows are basically to build a Chinese men's/women's team. Therefore, we first compared the network-wide popularity index of these groups in April 2020 and found that the development gap of each group is actually not the same. small.

The teams that debuted in the same year are more comparable. 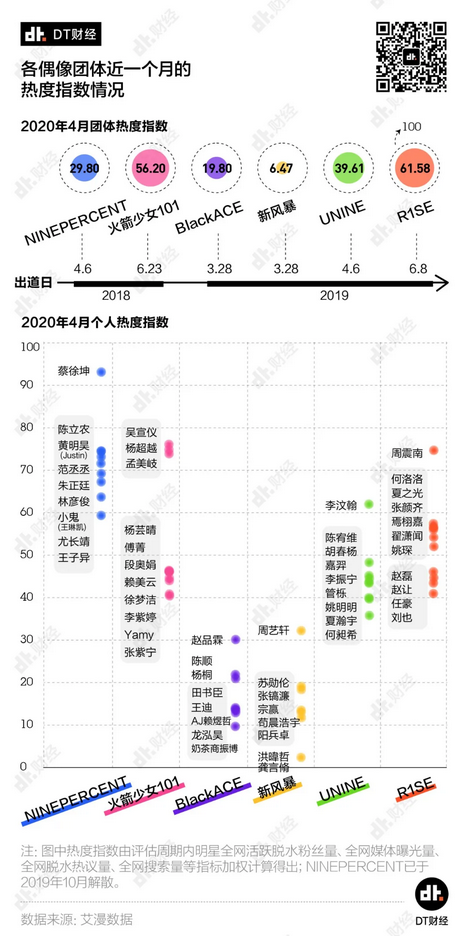 If you look at the network-wide popularity of the individual members, the members of the NPC who have been disbanded in October 2019 have returned to the arms of their respective brokerage companies, and their personal popularity ranks high.

Among the several limited groups that are also controlled by the platform, the Rocket Girl who debuted in 2018 and the R1SE members who debuted in 2019 have the highest overall popularity. Among them, Wu Xuanyi, Yang Chaoyue, Meng Meiqi, and Zhou Zhennan are more popular among several groups. Many-Cai Xukun is second only to the general trend.

Members of the boy group UNINE, who debuted at the same time as R1SE, are slightly less popular. Compared with other groups, the members of BlackACE and New Storm are in the lower ranks.

The number of Weibo followers of the members is similar to that of the whole network.

Among the TOP 30 idols of the 6 groups with Weibo fans, NINEPERCENT, who has returned to the personal agency, and R1SE, which is still on the rise in the group, were selected. Rocket Girls also accounted for 8 places.

Both UNINE and BlackACE have only C members in the ranks of TOP30, and New Storm is the bottom of all members. 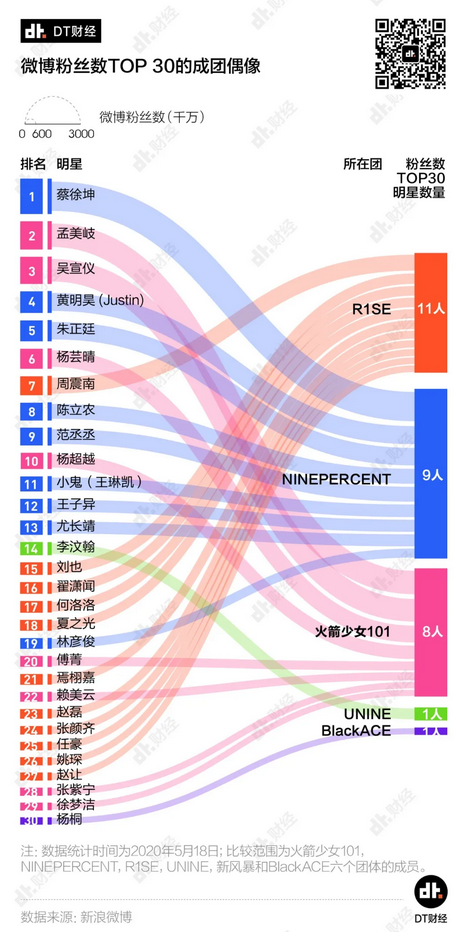 Applying basically the same debut model to walk the flower path, they all rely on the high popularity of the whole people to make their debut. Why is there such a big gap in the subsequent development of different idol groups? 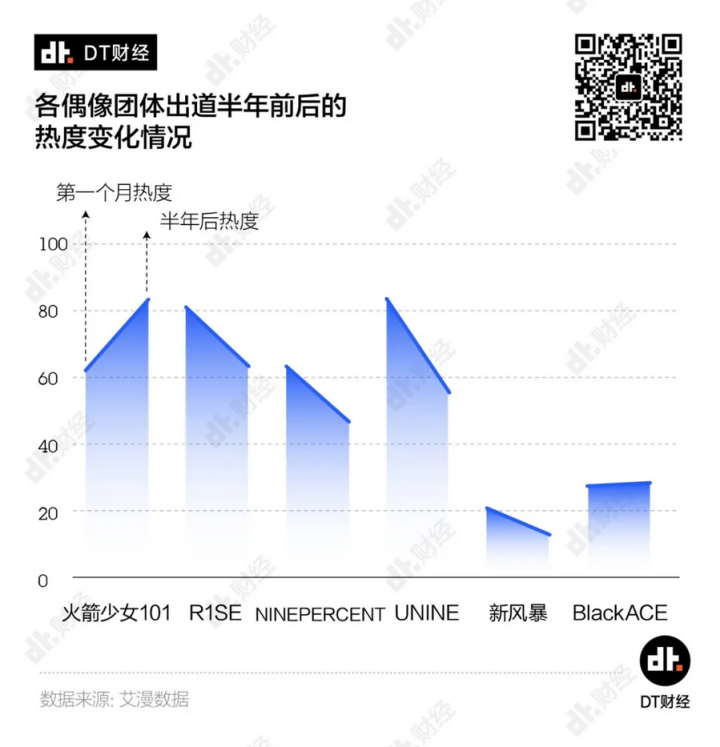 This has a lot to do with everyone's exposure after debut.

When we look at it from an operational point of view, we can see that the resources received by various groups since their debut are not so balanced.

The Rocket Girl, whose group popularity has risen the most since debut, has indeed obtained the most resources, including 3 custom variety shows, 10 singles and 2 albums, and also combined 10 variety shows, far ahead of other groups. The rich and intensive work output and exposure also helped Huo Shao win awards far surpassing other groups.

The next resource is Rocket Girl’s junior group R1SE. R1SE, as a rookie men's team that debuted in a group for less than a year, has not only exceeded NPCs in group resources, but also unmatched by UNINE and BlackACE. 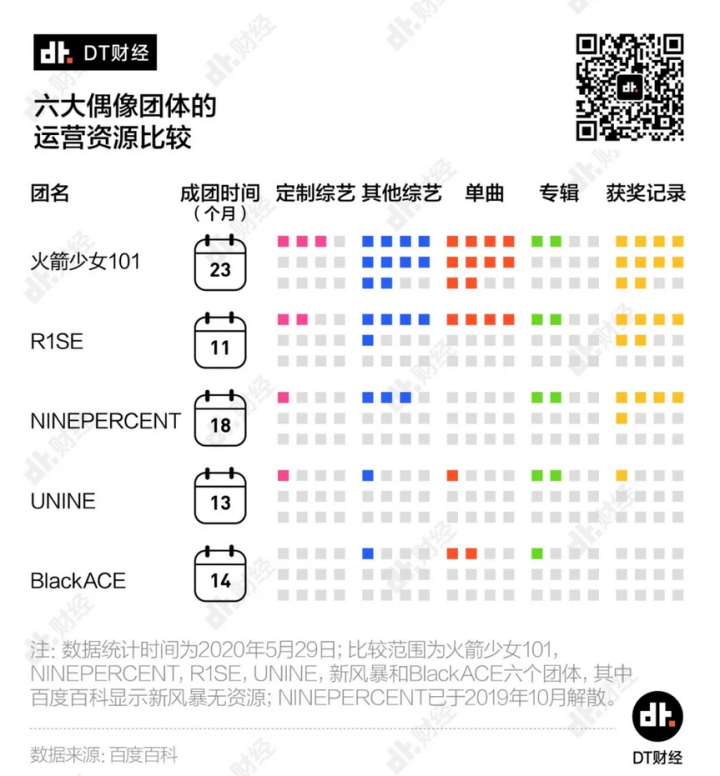 Relatively speaking, the operating resources of other groups after their debut have been bleak. BlackACE, which emerged from Youku's "In the Name of the Group", only recently participated in Tencent Video's music group competition show "The Hot We", and this has become the only variety show that has been integrated since their debut.

UNINE, who was very popular at the time of debut, was not very strong in group resources, and became a typical representative of high popularity.

UNINE somewhat continued the trajectory of their senior NPC group until it was disbanded. The NPC only appeared on 3 variety shows, and the customized variety show was only available in "Limited Memories" released before the disbandment.

This may have something to do with the operating style of the iQiyi department. After NPC made its debut in a group, the contract signed with the platform was relatively loose, and there were still personal brokerage companies behind the members. The group has few operations, and it has attracted many complaints from fans. 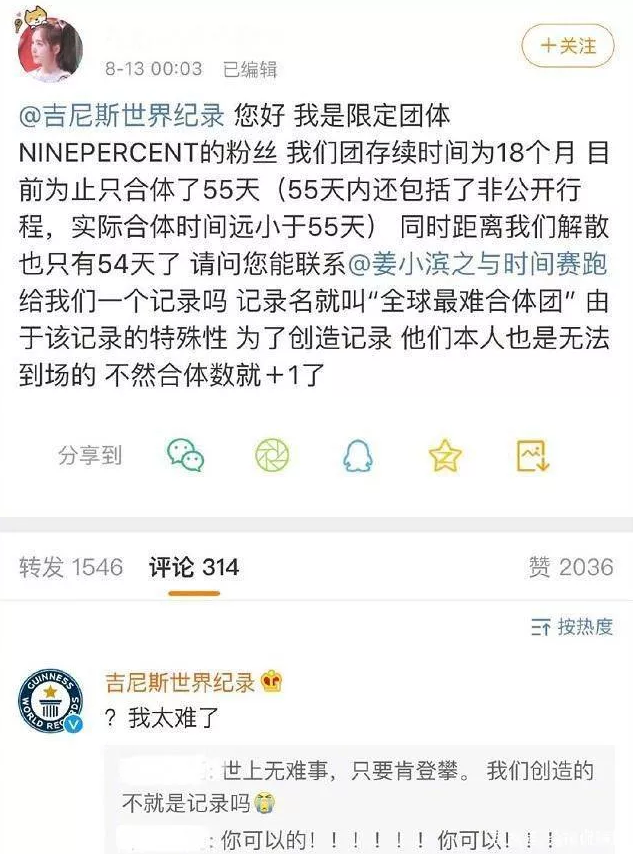 It is not difficult to find that the iQiyi group represented by NPC does not seem to attach particular importance to the follow-up operation of the entire group.

The Tencent video group represented by Rocket Girl and R1SE is operating the entire group through platform resources.

In fact, these two operating methods have their own advantages. From the perspective of popularity, as the NPC of the first-generation 101-style men's team, the personal popularity in the group is relatively high, but the popularity of the group has declined rapidly, and the basic debut is the peak. The popularity of Meng Meiqi, Wu Xuanyi, and Yang Chao of Rocket Girl 101 is significantly higher than that of the other members, but because of the exposure of a large number of group resources, the collective popularity has also risen.

This downward and upward trend is also reflected in the consumption influence of idols. 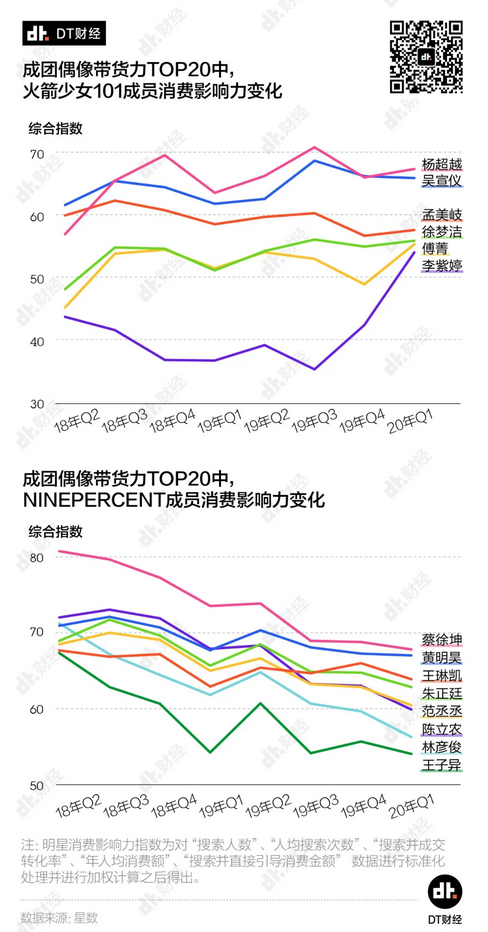 In other words, Rocket Girls who focus on group operations may have more room for growth in commercial value. As a women’s team, Rocket Girl’s eye-catching performance in a group of men’s groups broke the stereotype that female idols are not as good as male idols. This is inseparable from the bonus of operations, which is also explained from the side. A planned operation of the portfolio as a whole may have better benefits in terms of comprehensive influence.

So, what exactly is an effective idol group operation? Under today's idol industrialization system, what changes have taken place in our starmaking industry?

Back in 2009, as "Super Girl" was renamed "Happy Girl" and various satellite TVs successively launched their own talent shows, domestic idols fell into a downturn. It wasn't until 2018 that Tencent Video and iQiyi successively launched the 101 model of "trainee + group", which greatly activated and subverted the idol industry that had been silent.

The trainees in the program spent a few months from obscurity to national production, and under the synergy of capital and traffic, a complete industrialized star-making chain has also taken shape.

In this chain, trainees and idol groups are the products, the brokerage company is the seller, and the producers and advertisers of film and television variety shows and music works are both buyers and sellers. TAs buy the attention of idols and sell them. It is the works or physical goods launched with the help of these attentions. Finally, these works and entities will be consumed by the fans. 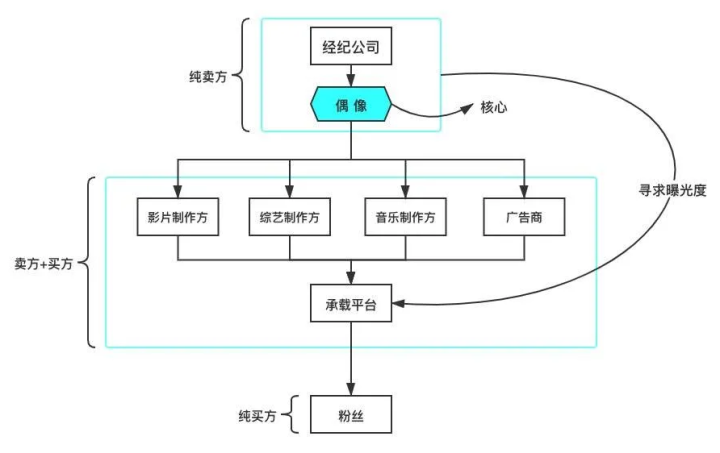 From debut to realization of commercial value realization, successful idols cannot do without the early training investment and the stable high-volume exposure after their debut.

In South Korea, the origin of trainees, the key to the success of this model lies in one-stop professional services from excavation, training, packaging to marketing. Korean brokerage companies often spend 5-10 years and invest tens of millions in costs to cultivate a debut group.

For domestic brokerage companies, the professional training system and comprehensive entertainment resources are somewhat unsatisfactory. then,

Unlike the Korean trainee system, the role that plays a key role in the future development of idol groups in the domestic market has changed from brokerage companies to platforms with powerful resource integration capabilities. The role of the platform is similar to that of producers and advertisers—both a seller and a buyer.

After practicing the generation group debut, how to use the existing industrial resources to maintain and expand the influence of the idol group has become the top priority in the star-making chain. Only when Internet platforms actively develop IP in the upstream, produce their own works, and obtain autonomy over the supply and demand of the idol industry through vertical integration, can the artist's influence be maximized.

Among the six groups we compared in the previous article, the groups that performed better in popularity and commercial value were from Tencent Video and iQiyi's self-made variety shows.

Simply speaking of the IP resources and production capabilities of these two platforms, we can see that both have rich experience and capabilities from IP incubation to distribution. Tencent Video not only has the creation series, "Tomorrow's Son" and other explosive content, it also derives rookie strategic variety shows such as "Hot We" and "Supernova National Games". In addition, it has also produced "Forgettable Restaurant", High-reputation content such as "Flavor in the World" and "Life in Adventure". IQIYI’s self-made variety shows include "New Rap in China", "Youth with You", "Trendy Partners", and "Hot-blooded Street Dance Troupe".

In terms of IP derivation, iQiyi has built comics, online literature, games, e-commerce and other sectors in the past two years to apply IP to a variety of entertainment products.

Thanks to the comprehensive entertainment ecosystem of Tencent Group, the sectors reachable by Tencent Video and the resource experience that can be called may be stronger than iQiyi. Tencent's digital content sector has taken over the layout of its own IP, TV series, animation and variety show production, music and other resources, and its reach extends to almost every corner of the entertainment industry.

We can see that platforms are becoming more and more aware of the planning of idol groups. "Creation Camp 2020" Producer Qiu Yue mentioned in an interview: "Like this year’s group works and concerts after the girls’ group, they are suitable for variety shows, including all surrounding plans and fan club plans. In fact, we have all prepared. Up."

Judging from the results, we can see that groups represented by Rocket Girls and R1SE have a strong overall operation after forming a group. The NPC that emerged from "Idol Trainees", as the first generation of "101" style men's group, has been criticized by fans for "no group activity" and "closed business", and it is difficult to exert the influence of the group.

On the one hand, the fan circle is still regarded by the public as a niche circle, which means that there is still huge room for digging in the fan consumer market. On the other hand, with hundreds of trainees being launched on various platforms once a year, the track has become increasingly crowded.

At the moment this manuscript is issued, Rocket Girls will soon be disbanded, and the new girl group launched by Tencent Video and iQiyi is about to debut and stand in the center of the stage.

But whether it is to build a group or an individual, in the foreseeable future, how to use diversified content and channel resource operations to truly retain the traffic that broke out in variety shows, and use this as a starting point to further snowball and amplify, it will still be a domestic idol making stars The center of gravity that cannot be circumvented on the chain.